So I’ve had my own personal Vault for ages…

And a couple of years ago, I spoke at HashiConf1 about how we2 manage our Vault configuration with Terraform. So it feels like it’s about time I get around to doing something similar for my own Vault.

For now, I’m not gonna do anything fancy; I just want bare minimum Vault Terraformability.

I’ll be using Terraform Cloud for this, because I don’t want to have to do things by hand if I can avoid it, and TFC is cool. Terraform Enterprise also exists, and is almost the same thing as Terraform Cloud, but different in ways I’m not going to get into right now. If you do not have an account, you can sign up for one at app.terraform.io

I’m also not going into how to set up Vault; this is mostly for my own reference, but if anybody else is following this, I’m assuming you’ve got a Vault set up already. If you haven’t got a Vault yet, you may wish to consider HCP Vault, which is now generally available, so you don’t have to put much effort into spinning it up.

My Vault is available over the public Internet directly, because YOLO, so if yours isn’t then you’ll also need to get routing from TFC/TFE to Vault in place.

Let’s start with the bootstrap configuration on the Vault side.

First thing we need is a Policy, which will grant Terraform the ability to manage stuff. For now, I’m leaving it at the bare minimum, just so I can prove that it’s all working, and I’ll expand on it later (with Terraform itself).

Next, we need an Auth method. I’ll be using AppRole for this, because it’s super flexible, and nobody’s written a dedicated Terraform Cloud/Terraform Enterprise Auth plugin for Vault yet3.

Logged in to my Vault UI, I’m going to use the built-in Browser CLI. That’s this little icon in the top right:

I’d love to this in the UI directly… but there’s no AppRole UI yet. Maybe one day.

Short TTL, no usage limits or CIDR restrictions, etc. But we’re bootstrapping, and this isn’t Production, so we don’t care right now. Terraform will update it’s own AppRole later to make it more secure.

Now we need some Terraform code, to actually… you know… do something.

This links the repo to a Terraform Cloud workspace (which we will create in a bit), and uses that to store the Terraform state.

Next we need to auth with Vault:

Here we’re telling Terraform to use AppRole authentication to log in to Vault, and we’re giving it the AppRole’s Role ID and Secret ID as a Terraform Variable.

I’m not specifying where my Vault is; I’ll be doing that with an environment variable.

And then, finally, we’ll have Terraform actually do something. In this case, create a simple KV secret:

We’ll add a bunch more stuff to this later, but that’s a problem for Future Lucy.

Now we want to set things up in TFC so it applies our Terraform code. There is a Terraform Provider for Terraform Cloud4, and I’ll probably look into that in future. For now, I’ll just do things by hand.

First things first, we need to create a new Workspace. I’m using the Version control workflow, so I can link it to a Git repo, and not have to worry about things: 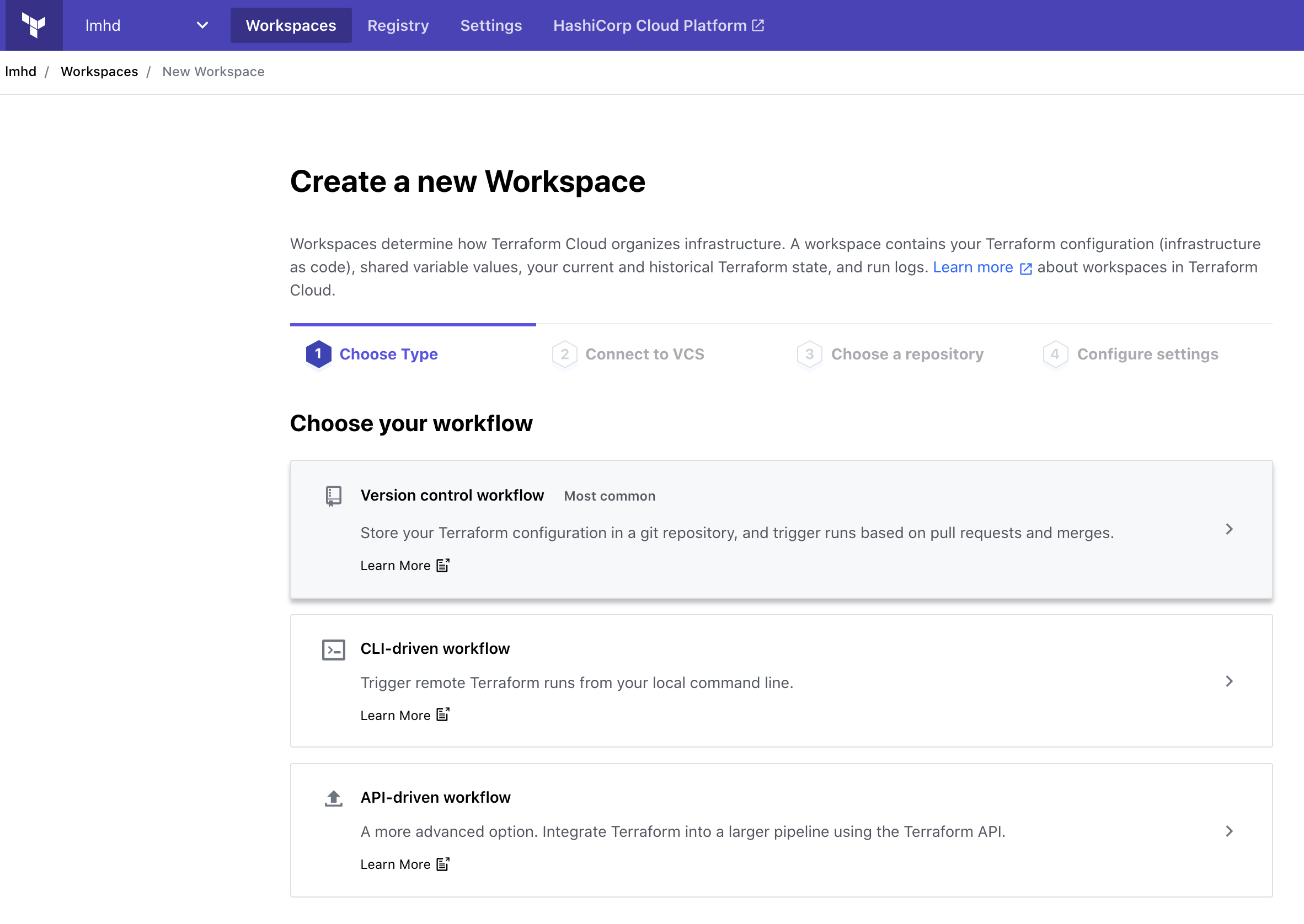 In my case, my Terraform code is stored in GitHub, so I’ll select that:

And I’ll pick my vault_terraform repo: 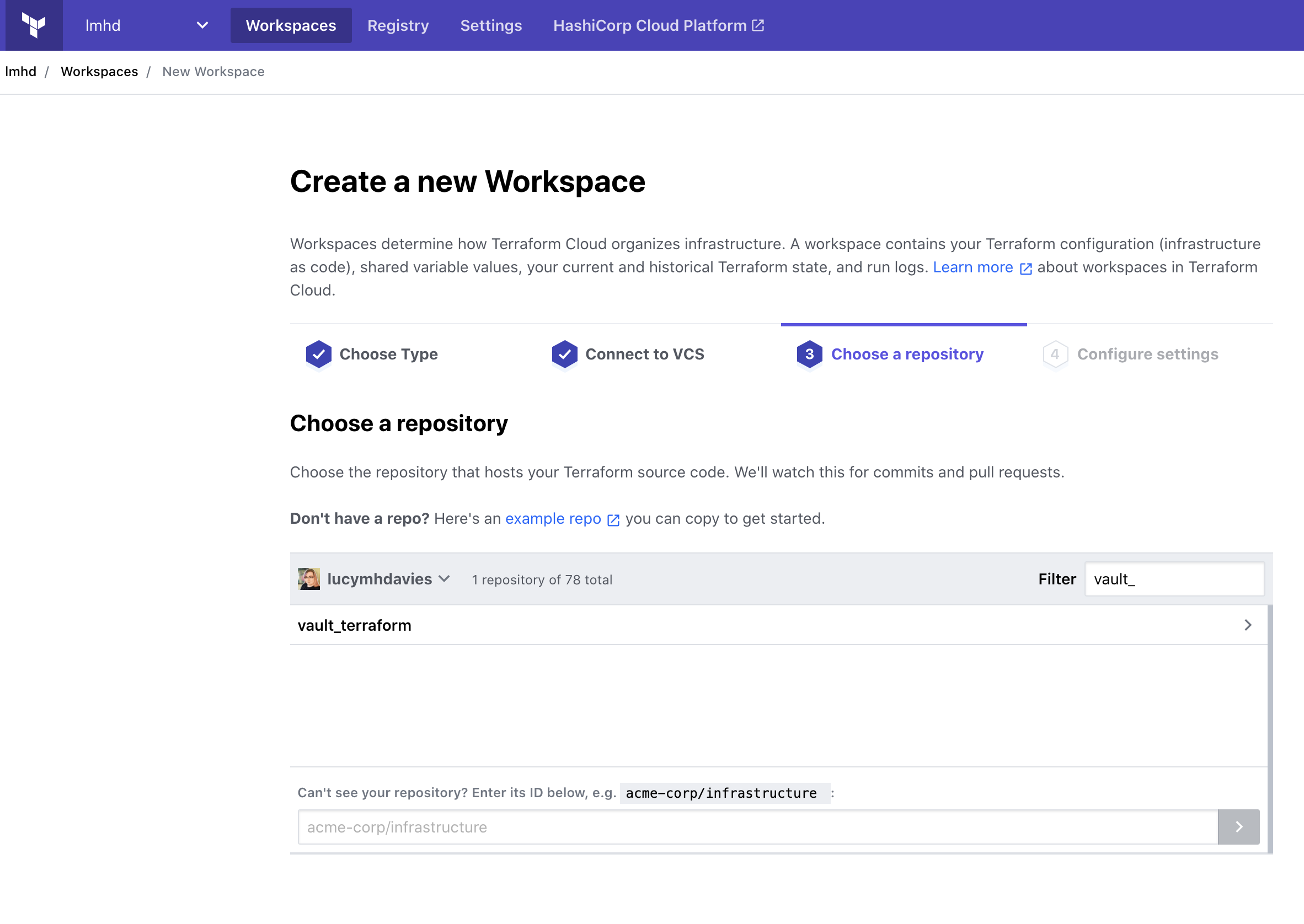 As far as Settings go, I’m going to call my workspace “vault”: 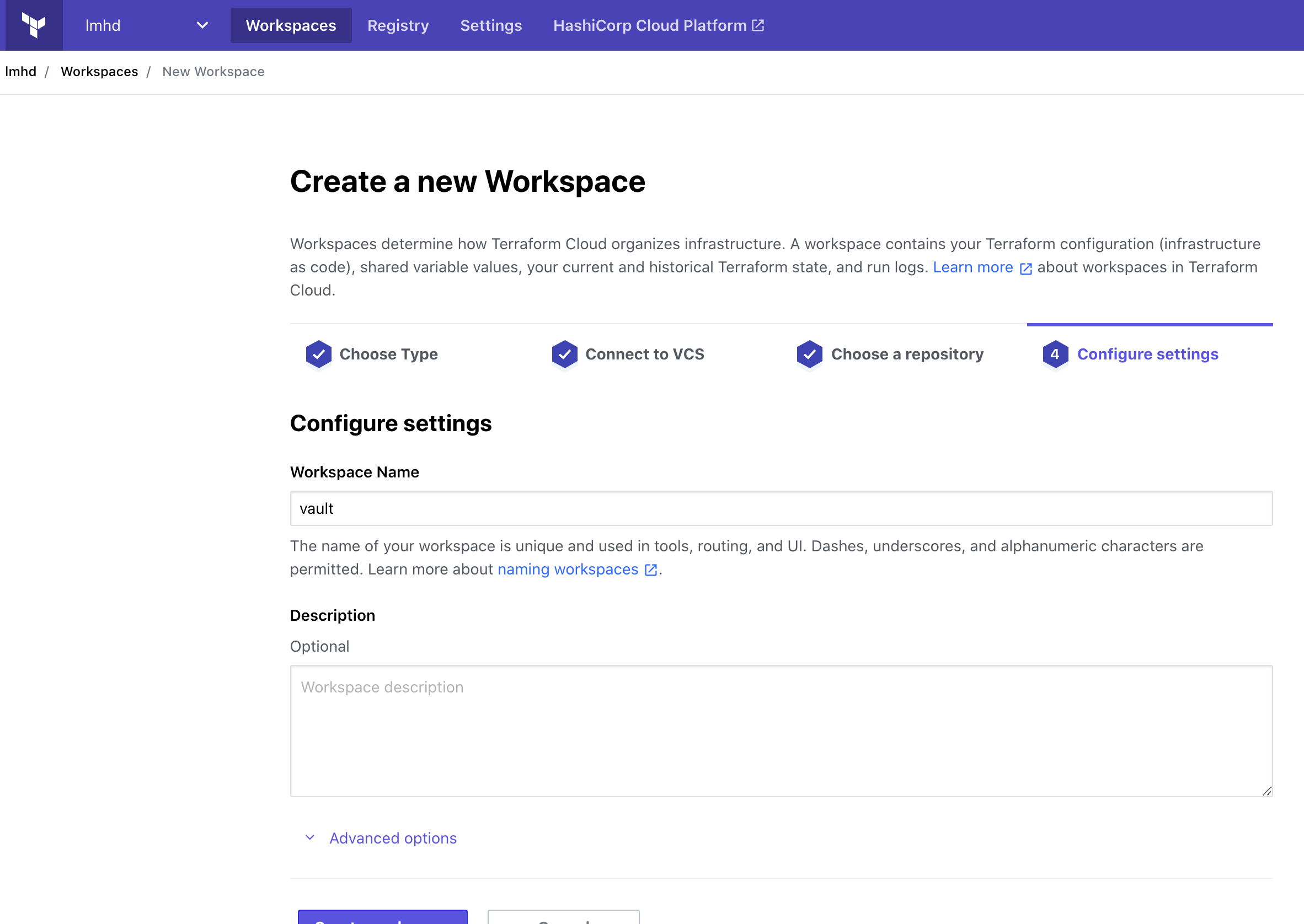 And I’m going to expand the Advanced options and enable Automatic speculative plans. This should mean that if I make Pull Requests into this repo, then Terraform Cloud will run terraform plan on them. Pretty useful. 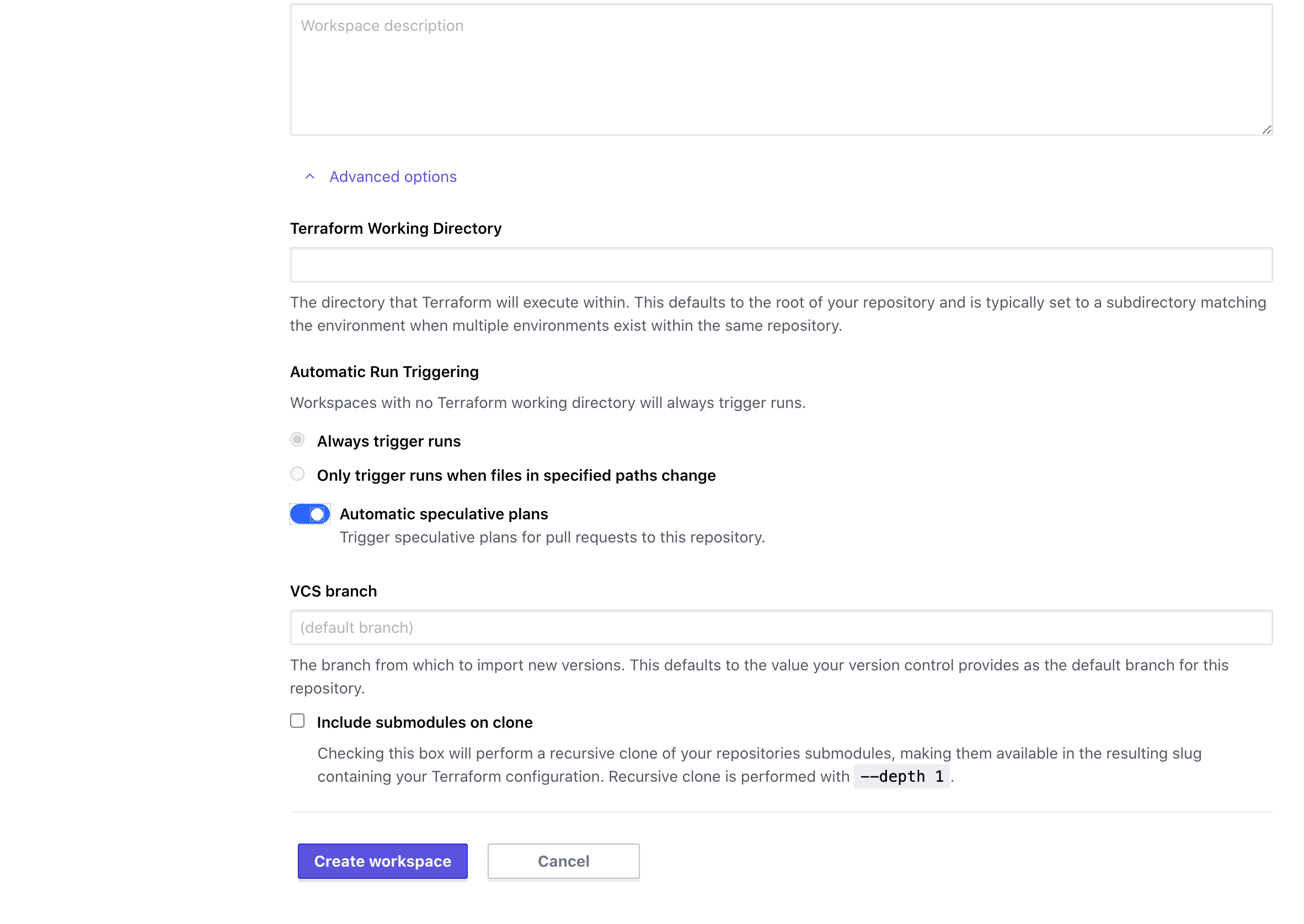 Now that we have Terraform Cloud configured to use our Terraform code, we need to tell it how to find Vault, and how to auth.

We’ll start with the latter.

Remember how, in the Terraform code, we defined some AppRole variables, but didn’t set any values?

Back in our Vault UI’s Browser CLI, we can read the AppRole’s Role ID with:

And we can generate a Secret ID with:

In our Terraform Cloud Workspace, we can add these as Terraform Variables. These are secrets, so I recommend marking them as Sensitive, so they do not show up in the UI and cannot be read.

We can also add the address for our Vault as an Environment Variable, VAULT_ADDR. 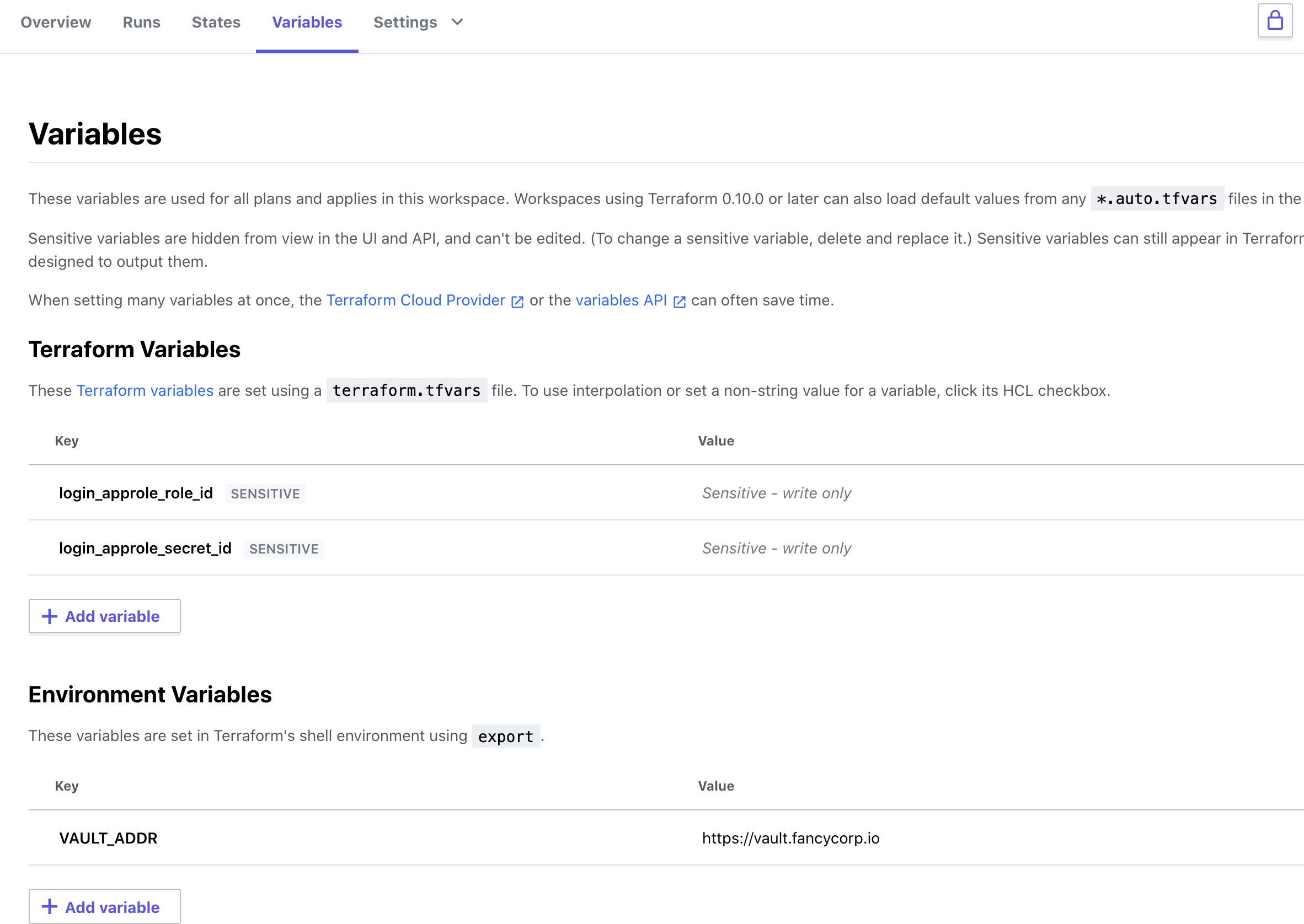 And that should be everything.

But does it work?

In the Runs tab, we can trigger a new plan: 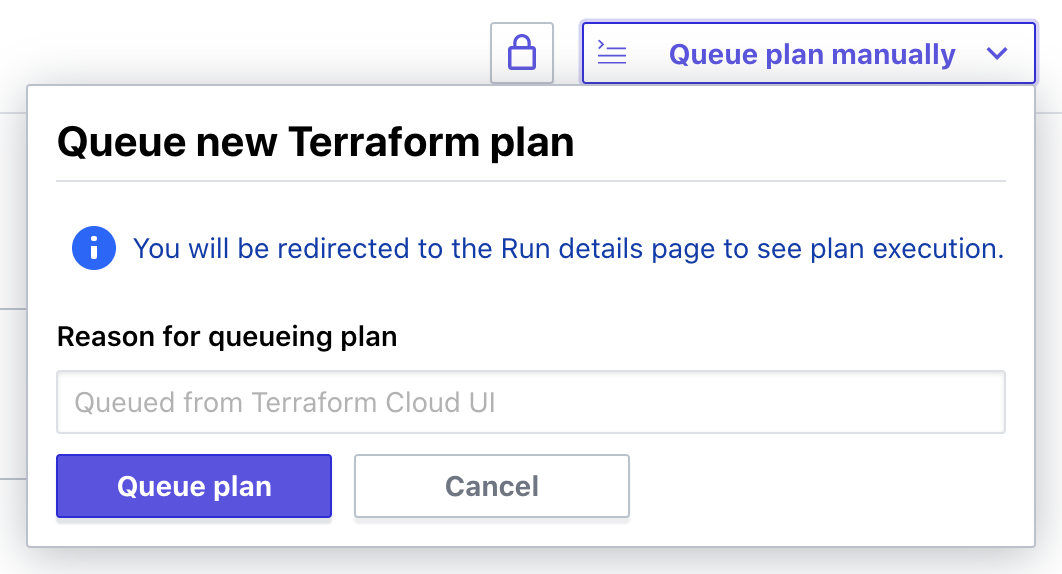 I’m redirected to the Run details page for this Plan, and pretty quickly I can see that Terraform wants to make some changes:

I’m asked to confirm before it applies anything, and then we see that the Apply has been successful.

And if we check in Vault, we can see that a secret has been created:

And to make sure it’s persisting state and reading from Vault, I’m going modify that secret by hand, then run Terraform again.

This time we see the plan:

So I’m satisfied that everything is working as it should.

So it’s pretty basic so far, but it’s a good foundation to build from.

My next steps with this will be to Terraform the chicken/egg things. i.e. the vault_terraform Policy and AppRole, and then work my way through the rest of the configuration I already have.

I’m also going to see if I can dynamically determine the IP addresses for Terraform Cloud5, and add those as a CIDR restriction on the AppRole.