A few days ago (the day after World Emoji Day as it happens) I discovered a tweet:

Y’all know what to do https://t.co/YCRHtJfWAk

Apparently there’s a bot keeping track of which emojis get the most use. It’s made by Jeremy Schmidt and is called, fittingly, LeastUsedEmojiBot. You can find the code on GitHub

As a fan of emojis in general, this got me interested. Obviously I wanted to try to help the humble Aerial Tramway emoji reach its true potential of second least used emoji on Twitter.

And I think it only counts number of tweets it’s used in, rather than number of uses.

It does appear to update pretty dam quick.

Digging into this further, I found that the bot got its data from a site called Emojitracker, made by Matthew Rothenberg

That’s a LOT of data, and some nice APIs too:

There’s a REST API, to get a snapshot of all emojis, and a Streaming API for updates.

It was at this point that I noticed that usage of the Aerial Tramway emoji was increasing faster than its rival, the Input Symbol for Latin Capital Letters. This was almost certainly due to LeastUsedEmojiBot highlighting it. At some point it would overtake, but I wasn’t sure how soon.

It was now Friday afternoon. At work, we have a thing called “Learning and Development Time”, in which you can (within reason) basically do whatever you like to further your personal development. It doesn’t even have to be work related. In the past, I’ve used this time to work on various personal dev projects, which I may blog about at some point.

One of those previous projects was a Prometheus Exporter for Twitch.tv. My wife is a Twitch streamer (obligatory plug: SeraphimKimiko), and I’m a nerd, so I wanted to keep track of how many people were watching her live. So I made this, written in Go, consuming the Twitch APIs, and exporting them as Prometheus metrics. I included a Docker Compose file to spin up the Prometheus exporter, a Prometheus server to scrape it, and a pre-configured Grafana instance to draw pretty pretty graphs. And it’s written in Go. Because of course it is.

Thanks to that project, I had most of the code already to graph data from the Emojitracker APIs. I got to work on what would eventually become my Prometheus Exporter for Twitter Emojis.

Let’s see what the Emojitracker API gives us. The API endpoint I’m interested in is https://api.emojitracker.com/v1/rankings, which returns JSON like:

First, we need a Prometheus metric. I used a Gauge (which, in Prometheus is a metric which can go up or down). Arguably I should have used a Counter (which can only go up), but this was a proof of concept, and I wasn’t sure what happens if tweets get deleted. I’m interested in the emoji itself (because apparently both Prometheus and Grafana support those just fine), as well as some plaintext identifiers:

Now we need to populate that with some data.

I used json-to-go to quickly generate a type which matched the output of the API:

For my Twitch exporter, I had used curl-to-go to generate some Go code to call the APIs, and return structs. The code my Emoji exporter used was based off that.

There are two functions here. The first calls the API, and returns (among other things) the response body:

The second takes that response and converts it into something of type EmojiRankingsResponse.

You can find this in emoji.go

This worked great! I now had some metrics!

But these were static, which is not much use to me. I needed updates.

As a proof of concept, I initially just called the REST API every minute for updates, and updated the prometheus metrics accordingly. But this was me being lazy. The REST API Documentation says you should not do this:

When to use the REST API

In general, use the REST API to build an initial snapshot state for a page (or get a one-time use data grab), but then use the [Streaming API][https://github.com/emojitracker/emojitrack-streamer-spec] to keep it up to date.

Do not repeatedly poll the REST API. It is intentionally aggressively cached in such a way to discourage this, in that the scores will only update at a lower rate (a few times per minute), meaning you have to use the Streaming API to get fast realtime data updates.

🚨 IN OTHER WORDS, IF YOU ARE POLLING FREQUENTLY FOR UPDATES, YOU ARE DOING SOMETHING WRONG AND YOU ARE A BAD PERSON. 🚨

(Note that this is a design decision, not a server performance issue.)

I’d never used a streaming API before, so didn’t know what to expect.

According to the documentation, I could expect:

I curl’d the API, to see what this looks like, and wow that updates quick!

So I needed to consume that URL, look for lines beginning with data:, and parse the JSON into something useful.

First thing was to just keep reading the API:

We only care about lines which begin with data:, so let’s get those (and drop the data: prefix):

The JSON itself is a series of string keys, with integer values. In Go that could be represented as: map[string]int.

I wasn’t sure if Go would let me parse the JSON directly into something like that, but I gave it a try:

Sure enough, it worked! It might error at some point, but like I say, proof of concept.

All that was left was to update my metrics. I used the rankings object I created earlier to lookup the name and emoji for the ID, and used that to increment my prometheus metric:

And that’s basically it. It could absolutely do with some tidyup (for example, being able to lookup the emoji details from the ID, without having to iterate over rankings), but it works fine for my proof of concept.

Now, let’s get this into pretty pretty graphs.

I went through a few iterations of this, before I settled on one I liked:

I was predominantly interested in the bottom two emojis, so my dashboard kept track of those two.

I had the overall usage in a Graph panel.

This used Prometheus’ “Bottom K” operator, which I used to filter out only the bottom 10 metrics):

I also had indvidual Singlestat panels for the two emojis, configured for example with:

I left this running overnight to gather some data, then woke up this morning to discover that, oh no! Disaster struck!

Turns out, at some point in the night my prometheus exporter had stopped consuming the streaming API!

My numbers were stale!

Fortunately, 🚡 had not yet overtaken 🔠, so there was still time for me to see it happen.

Gave my Prometheus exporter a restart, and new data is coming in.

🚡 has certainly made quite a bit of progress since this morning, but the other one has too.

I kept watch, and just 20 minutes later, we did it!

So, now that 🚡 is the second least used emoji on Twitter, I'm not sure what will happen now.

Some people will continue to tweet, as @leastUsedEmoji will not have updated yet. I believe it's scheduled to update within 25m.

At that point... I'm expecting a massive spike. pic.twitter.com/nTreFd95BH

This is the tweet which pushed 🚡 into second least used!

I made a couple of tweaks to the dashboard following that. The new version includes a dropdown, so you can select which emojis you want to compare (from all of them); a table, showing specifically the bottom 5 emojis; and a rate graph, showing how many individual tweets there were over a time interval of 10 minutes.

I've updated the grafana dashboard slightly, if anyone is still interested.
🚡

I've also added a rate graph, which converts the cumulative number of tweets into tweets over time (i'm using a 10 minute interval).

Usage spikes are even more obvious in this graph. pic.twitter.com/ocbWwFtbAD

What was the point? What did I learn?

You mean I need to do stuff because it has a point?

That’s not a thing.

Seriously though, this was a fun thing to work on, especially as I was able to re-use so much code, letting me play a bit more without figuring out how to just get something working.

I already do a lot of realtime monitoring of a bunch of stuff at work, to make sure I don’t get woken up in the middle of the night (or to ensure I definitely do, if something needs fixing). But these two things (my Twitch exporter, and my Emoji exporter) include monitoring of external APIs, and human nature.

This one in particular was fascinating. Because it was a relatively small dataset (the LeastUsedEmojiBot only has 14k followers on Twitter), I could clearly see cause and effect. For example, the spike in usage following the bot’s announcement that 🔠 was now the least used.

It was also interesting being able to make preditions, using Prometheus’ predict_linear() function:

According to my grafana dashboard, we should be overtaking Truncated Latin Alphabet some point early tomorrow. 🚡 https://t.co/w63l6lRJDv

Using Prometheus's built in predict_linear() function, the two emoji should be approximately equal in about 9 hours (5am for me in the UK). 🚡

I was wrong, of course. Human nature is not so easily predictable by simple linear regression.

But yes. This was fun. I need to do silly things like this more often.

I’ll leave you with this video, by a very inspiring woman:

And one more graph (click on it to go to the interactive version!): 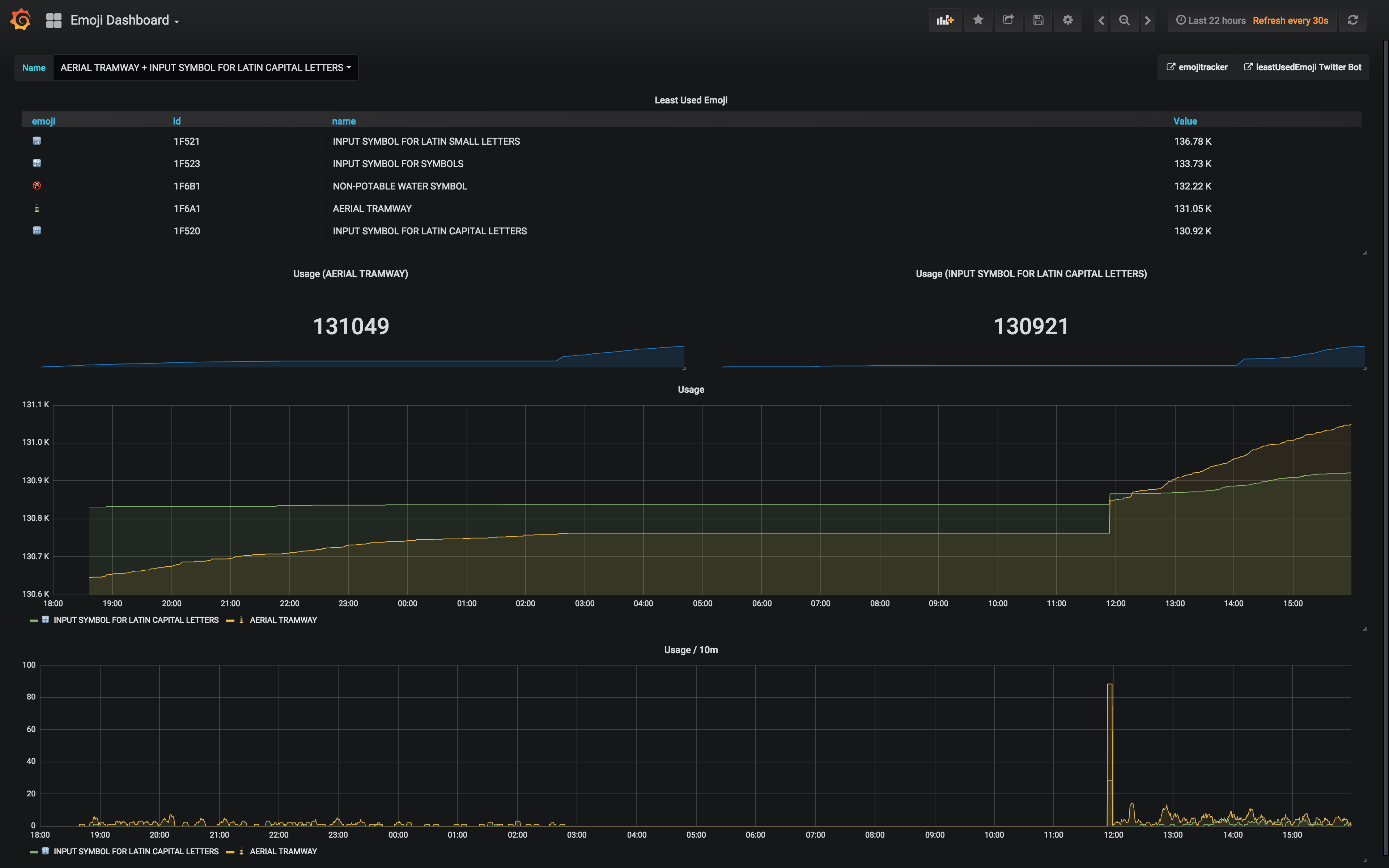